Signs your Hosta is Water Stressed 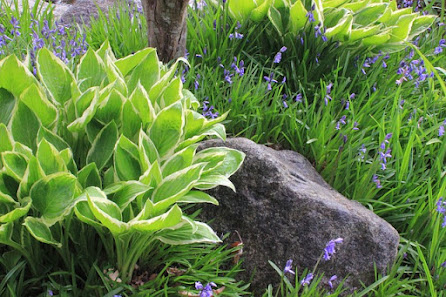 Hostas are well known as easy-care perennials.  The fact that they come in such a variety of sizes, colors and leaf shapes is just one more reason why hostas remain one of the most popular perennials for shady and part sunny gardens.

To understand why a consistent watering plan is essential for healthy growth in hostas, it’s helpful to know where hostas came from and how they grow.

Hostas were originally from Korea, Japan and eastern China where they received lots of water, an average of 50" to 60” of rainfall each year, far more rain than in most other areas.


A hosta builds up its energy reserves in the summer and fall and will store that energy in its rhizomes. It will use that energy in the next spring when the hosta emerges.

Employing a soaker hose for your hostas is a great idea.  Below is the one I use.  It's inexpensive, comes in lots of different lengths and I just move it around the hosta farm in areas that need some additional water.

Inadequate watering during the summer and fall  forces the hosta to drop its leaves early.  This is how it will protect itself by going into an early dormancy so it can survive periods of extreme dryness.

The result is that in the following year, without that stored energy, that hosta will remain the same size or even get smaller, depending on just how much energy it has stored.

If this inadequate watering happens a few years in a row, while a mature, healthy hosta may be able to tolerate the dry periods by simply going dormant, young hosta roots may actually shrivel and die.  Yes, you can kill a hosta!

So, How Much Water Do They Need?


Generous watering all season long is the best thing you can do for your hostas. A minimum of an inch of water per week, either supplied by Mother Nature or otherwise, is recommended.

Hostas love water!  As long as your soil drains well, you basically cannot overwater them.


During the hottest or driest parts of the summer, an increase of water to an inch and a half to two inches is recommended. And it's important to keep this watering schedule until frost.


Some hostas are considered "sun tolerant."  If you have some of these hostas planted in a sunny area, increase the water to two inches per week.


Hostas that have large leaves will need even more water as those leaves allow for a large amount of transpiration and water loss.

Hostas grown under shallow-rooted trees may require more water as they have to compete with tree roots.


Another great idea is to install one or more rain barrels.  In addition to saving you money, putting them in different areas of a large yard can save a lot of time.

Deep soakings is much better than frequent light waterings.


Why is that important?

Water applied at a very slow rate to the soil for several minutes encourages deep root growth and limits water wasted through runoff.


Deep soakings also encourage the hosta roots to grow deeper into the ground where they can find water during dry periods.


Conversely, frequent light waterings encourage the roots to grow nearer to the surface where the soil can dry out more quickly.


The best time to water hostas is early in the morning when the weather is cooler. This gives the water more time to reach the roots without evaporating.


As a guideline, if the soil around the hosta feels dry to the touch an inch below the soil surface, time for a deep soak.


As soon as you notice the problem, begin an intensive water plan for the rest of the season.  This will likely encourage a flush of new leaves to grow.


When you do this, however, keep doing it!  You don’t want to encourage new growth and then stop watering, letting the plant die back again.

You want soil that easily drains, has water retention qualities and fertility to feed the plant.


A two- to three-inch layer of aged manure, organic mulch like shredded leaves or grass clippings around the plant (but not touching) will help to conserve the moisture in the soil. That mulch layer is also beneficial to hostas by regulating soil temperature and adding nutrients to the soil as the material breaks down.


Hostas that are never water-stressed will grow bigger, faster and will give you beautiful and healthy leaves longer into the season.


So if your hosta looks sickly, has browning edges or seems to have stopped growing or has actually gotten smaller, stick to a consistent watering plan and watch it eventually bounce back and give you many more years of beauty in your garden.

Love hostas or know someone who does?
Visit our website for great hostas at an affordable price!
SunsetHostaFarm.com