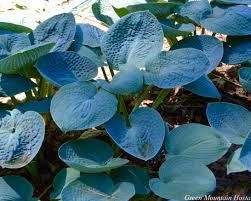 The Sun's Effect on Blue Hostas

Blue hostas require the most protection from the sun because the blue color is actually a waxy coating on the top and or bottom side of the leaves. The leaves are actually a shade of green, but the waxy coating makes them appear those great shades of blue.

Too much sun can cause the waxy coating on blue hosta leaves to melt off and expose the green leaf underneath. This is the reason it is recommended that blue hostas are planted in more shade than other hostas.

The blue hostas are always very popular and there are several shades of blue-leaved hostas. Blue hosta leaves will become bluer and bluer each year as they move to maturity, usually about four to five years. 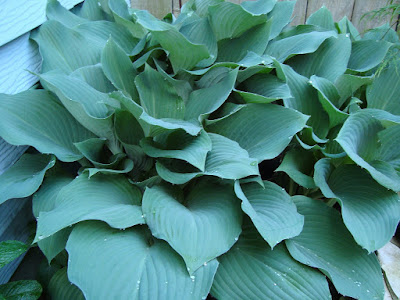 What's the best siting for a blue hosta?

The best siting for hostas with blue foliage is some morning sun and afternoon shade. If your blue hosta is keeping its blue color through most or all of the season, it's obviously in the right spot.

Hard or prolonged rain can wash off the waxy coating and give the hosta the appearance of green spots like you can see in the above picture. It is normal to see color changes in the hosta leaves throughout the growing season as the sun grows more intense. These changes are temporary for the season.

Hostas with thicker substance to their leaves can take more sun as they can absorb and hold more moisture. Big Daddy is a great example of this. Conversely, hostas with thinner leaves are more susceptible to sun-scald.

The leaf shape of a blue hosta will cast a different shade of blue on the leaves. For instance, leaves that are twisted or corrugated or that have deep veins will cast a deeper blue than hostas with smoother leaves.


There are hostas that are “Sun Tolerant.” If your hosta is advertised as such, it is your best bet for placement in some sun. When it comes to blue hostas, though, the blue leaves will turn green during the season when placed in some direct sun.


Blue hostas grown in warmer locations may only keep their blue hue until late June, while in the northern climates, the leaves will remain blue longer.

There is much debate on which hostas are the best blue-leafed hosta cultivars. While the answer to that is very subjective, here at Sunset Hosta Farm we have grown many types, and these are the blue hostas that we prefer to grow and sell.

Mature Size: Large  Height 28”   Width up to 40” Chalky blue cupped leaves that retain their blue color for most of the growing season. White to pale lavender flowers appear in mid-summer.


Size: Very Large Height 32” Width up to 70"
One of the bluest hostas. The blue leaves are heavily textured and heart-shaped. They form a nice-sized flowing mound. White to lavender flowers appear in mid-summer. Blue Angel will also draw in the butterflies.


These thick blue hosta leaves are upright, vase-shaped, and slightly cupped and corrugated. Blue Hawaii holds its blue color well through the season. It is also slug resistant. White blooms are fragrant. Great as a specimen plant or in a container.

Mature Size: Very Large Height 33”  Width to 72”
It's not only a garden standout, it's also a vigorous grower and sun and slug tolerant. It will greet you in the spring with nice blue umbrella-shaped leaves and pale lavender flowers that appear in the summer.

Size:  Very Large Height: 33" Width to 70" This hosta can't help but get noticed. Krossa Regal has frosty gray-blue leaves that are vase-shaped with slightly wavy edges. Spikes of lavender bell-shaped flowers on top of 5' scapes appear in late summer. Krossa Regal will get wider as it matures, so give this one plenty of space. Great when used as a specimen plant or in a container. Pair this one with a creamy variegated hosta like H. June for a dramatic garden statement. The thick leaves make it slug resistant, too.

Mature Size:   Medium  Height 18”   Width to 32”
This sport of 'Halcyon' and 'Riptide' makes a medium-sized mound of light blue rounded leaves that hold their color through most of the season even in warmer climates. Pale purple flowers shoot up in July and August. Tolerates morning sun very well.


A very popular steel blue hosta with heart-shaped leaves and heavy ribbing. Very sturdy, compact, and reliable grower. Looks great in containers, too. Holds that beautiful blue color well through the season. One of the bluest, and this one's been used to create many sports.

Hostas are such a forgiving perennial, they can easily be moved to a more suitable location until it's in just the right spot. If the leaves do turn green for a season, not to worry. The blue waxy coating will return as the hosta emerges the next season.


The blue colors of hostas have been described in many ways, including deep blue, powdery blue, intense blue, icy blue, silvery blue, and chalky blue. But no matter which term you use, with the right care and placement, blue hostas will add a peaceful, cooling feeling to your perennial shade garden.


Because there are so many variables to consider, you could follow all of the above suggestions and still not be successful in achieving an exact leaf color.


One of the great things about hostas is that they're easy to dig up and move to another location. And there's always the possibility of planting your hosta in a pot. Then you can move it around until it's in just the right spot for the coloring you're after.

Hostas continue to be a favorite perennial plant for plenty of reasons. Their toughness, beauty, ease of care, and variety of great leaf colors and shapes make them one of the best plants for a shade or semi-shade garden.
Have a question about hostas or have an idea for a future article?  Feel free to e-mail me at susan.sunsethostafarm@gmail.com

Love hostas or know someone who does?
Visit our website for hostas at an affordable price!
www.sunsethostafarm.com
This post may contain Amazon affiliate links and as an Amazon Associate I earn from qualifying purchases without costing you anything.