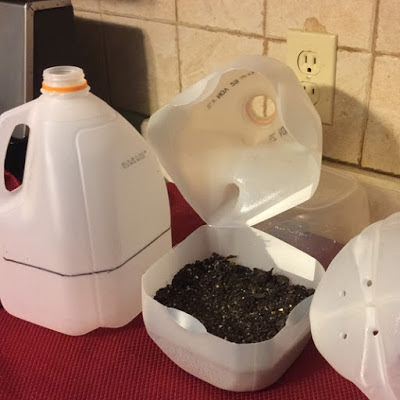 What is it and Why is it So Popular?

Why is Winter Sowing becoming so Popular?

What kind of seeds can I sow with the winter sowing method? 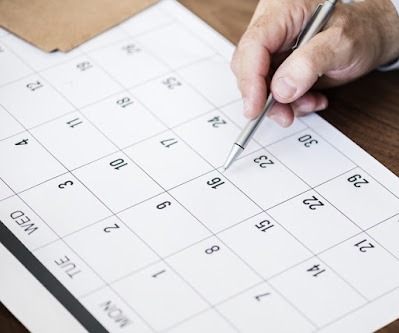 First, a Bit about Timing

It is generally accepted that you can begin to winter sow anytime after the Winter Solstice when the days are at their shortest and typically the temperatures are at their coldest.

The problem that I found with starting as early as the Winter Solstice is that here in Zone 6 Ohio, we often get some unexpected warm stretches in December. If I put the containers out that early and we get a warm spell, the seeds may germinate too early and the coming cold temperatures will kill the seedlings.

By planting a bit later when the threat of those warm-ups is passed, I can be confident that the seeds won’t germinate until spring, as planned.

For more specific timing for Zones 3 through 7 where the weather gets cold enough to winter sow, here is a general guideline for times to sow each category of seeds.

Want to know more about planting zones and ways to extend your season?  Try this book.

After ten years of trial and error, my technique for winter sowing is based on sowing the seeds in two stages. One for the perennial seeds of cold-season plants, and a later one for annual flowers and warm-season plants.

You can, of course, sow continuously through the winter months, but keeping it to a simple two-phase sowing system is much easier for me.

My first sowing is always around January 15 because there are seeds, like perennials, that need weeks of cold weather before they become stratified and can germinate in the spring, they are the first ones to be winter sown. 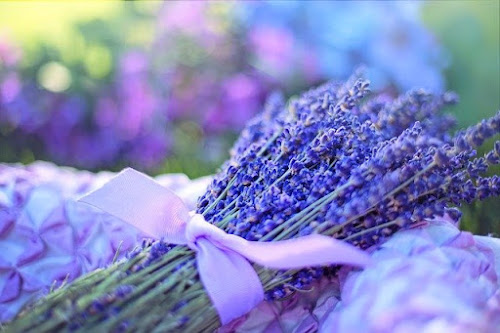 Examples of my first sowing include:

If you're not sure if your seeds need this cold treatment, you can look on your seed packet for words like “self-sow,” “direct sow in the fall,” “direct sow in early spring,” “cold hardy,” “cold stratification,” as well as any perennial plant.

(4 to 6 weeks before your average last frost date)

My second sowing is on March 1.  The second sowing is done more towards the Spring for annual flower seeds and warm-loving plants in general. You could sow these in the first sowing earlier, but you risk the chance that the seeds become waterlogged over the long winter, and I don't like to take the chance. 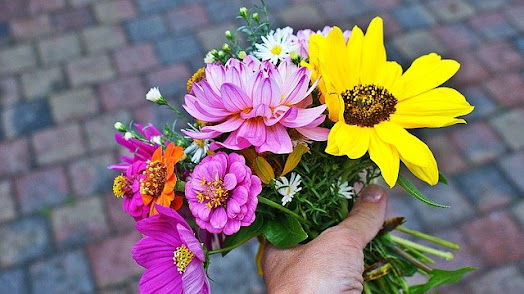 Examples of my second sowing include:

A Note about Vegetables.

One word of warning. The seeds of some warm weather veggies can sprout well in the spring, but in colder climates, they will sprout later and there may not be enough time to get a harvest. Sowing indoors may still be necessary for long-season plants in colder areas. 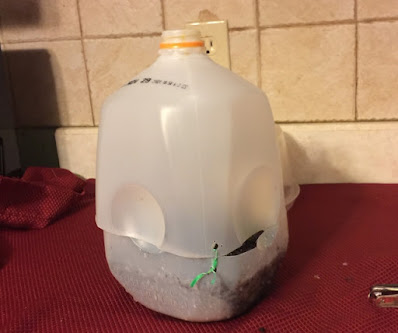 About the Winter Sowing Containers

I have had my best success with winter sowing in milk jugs and don't use anything else.

Why do most Winter Sowers Prefer Milk Jugs?

Some gardeners clean them and reuse them again. I put them in the recycle bin. I am able to collect plenty to start with fresh ones each winter.

As long as the container has these features, they will work:

Examples of these include: 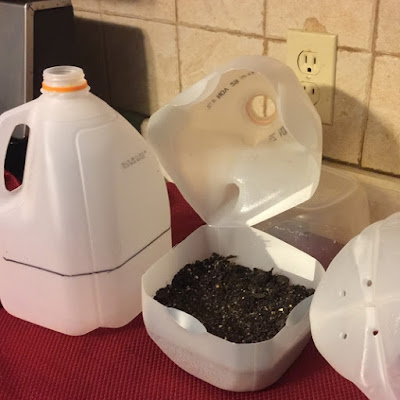 We'll use a milk jug for the instructions.

First, THROW AWAY THE LID OF THE MILK JUG OR 2-LITER BOTTLE! The lids have to be removed to let moisture in when it's placed outside!

Cut the milk jug around three fourths of the jug like the picture. I start with a knife to break the plastic and then use scissors to circle around to the handle.

Cut drainage holes in the bottom. In a milk jug I put at least five. You can use anything that works; a drill, a knife, some people use a soldering iron.

If you're not using something that has a lid that you can take off, like a deli plastic container, you will need holes also in the top of the container to let rain and air through.

Bend the handle back to open the milk jug. You're ready for the soil and seeds.

You will find various opinions on what type of soil works best for winter sowing. I've always used normal potting soil (the cheapest I can find) and have had absolutely no problems.

They usually contain a little fertilizer which helps the seedlings grow while they're waiting on me to get to them.

Two to three inches of soil in the bottom of the milk jug is plenty. You just want enough soil to germinate the seed and help the seedling along until you transplant it into its final spot in your garden.

If you do a lot of jugs (I do a hundred or so), soil gets expensive. You don't need more than 3 inches and you don't need the expensive stuff.

Important Step – Moisten the soil thoroughly before sowing the seeds so as not to dislodge the seeds later! 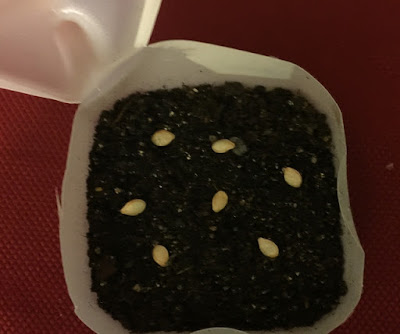 Since the intention is to transplant the seedlings out in the garden and not grow them very long in the winter sowing container, you can space the seeds much closer than you normally would.

How many seeds you put in each container will depend on:

Plant the seeds at the depth recommended. On average, the sowing depth of a seed is one and a half to two times the width of the seed. For very small seeds, just place them on top of the soil and tamp down to get soil contact. 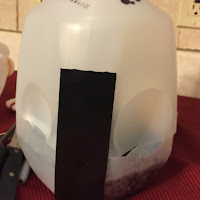 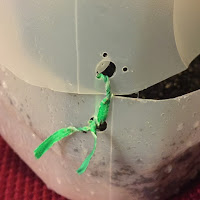 If you're enjoying this post or finding it helpful, please PIN IT! 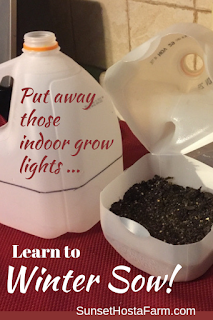 All about Winter Sowing

Here are a few options:

Good ole' Duct Tape.  One piece in one area should do it, usually across from the handle vertically. I found if I use more duct tape than that, I have a heck of a time taking it off later.

I have also done the bread tie trick. Put a hole in the top and bottom half and close with a bread tie. I have found this to work better than the Duct Tape, but it's a lot of work when you have a lot of containers.

Some people consecutively number their containers on the outside with a magic marker or paint pen, and then have a chart noting which seed is which number.

Some people write the name of the seeds directly on the outside of the container. Markers will fade in the sun; paint pens are great!

Whatever you write on the top half, also write it on the very bottom. Why? One, the sun won't fade it as quickly when it's labeled underneath.

I tend to cut off the entire top half as the seedlings start to grow and need more air circulation and light, and when I did that with the label only on the top, well, you can imagine. A lot of seedlings look alike when they're that young! 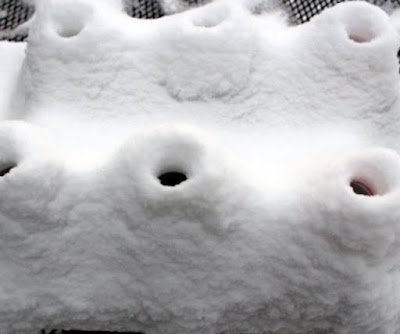 The seeds are planted in your winter sowing container.  What Next?

A little bit about watering.  On a sunny day, above freezing, look for condensation. Containers with little or no condensation will need watering.

Leave them in the snow, in the rain, doesn't matter.

I have a graveled area right next to my deck. It has good drainage and the containers are protected from any strong winds by the air conditioning unit.

It's not so important where they're at in the winter as long as the containers can get rain and in a spot where they won't blow around and dislodge the seeds.

Leave them be! That's the beauty of winter sowing!

Don't worry about the cold.  The seeds are sleeping.

worry about the rain. They need some moisture.

Don't worry about the snow. It's a great insulator. 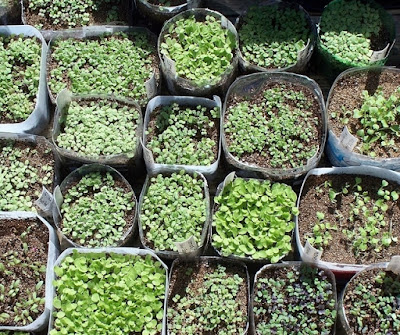 What to do in the Spring

Come Spring, I start peaking in the opening at the top to see if there are any sprouts yet. Different seeds will sprout at different times, so be patient.

Sun will kill more seedlings than the cold!  I've learned that one the hard way.

Once I see sprouts, it all depends on the weather. The seedlings are protected in their mini-greenhouses in early spring, but as the warm weather begins, I check a few times a week for soil moisture and I water lightly if necessary.

Since I initially put my containers in an area facing south, I will slowly move the containers to a shadier location when I get seedlings. If the seedlings are still waiting for me to transplant and we're getting some really sunny, warm days, I will start to cut out some sides of the milk jug to create more airflow.

You can also remove the entire top half if you choose. (You marked the bottom, right?)

Start transplanting whenever the seedlings are strong enough to handle. Just like any seedling that you would transplant, give it extra care until it's a strong and viable plant.

Let's recap the most important points

Winter Sowing -- It's Easy and It Works!

That's it! Whether you're winter sowing annuals or perennials, you'll find this winter sowing technique to be one of the easiest ways to get a garden full of great color!

And I can guarantee you one thing. In the Spring when you see your first jugs with little winter-sown flowers or vegetable sprouts in them, you'll be hooked on the Winter Sowing Method!