This article presumes that you are familiar with the basics of making projects with hypertufa. If you aren’t familiar with the process, or just need a refresher, go to our Hypertufa 101 article with step by step hypertufa-making instructions, by clicking here.


I have made several hypertufa projects and by far my favorite mold for making planters is wicker baskets. They can readily be found for a few bucks at second-hand shops so I don’t worry that they will be destroyed by the process.


When you firmly push the hypertufa mix into the wicker basket’s cracks and crevices, the final look has a basket imprint which I find hard to match by any other method. 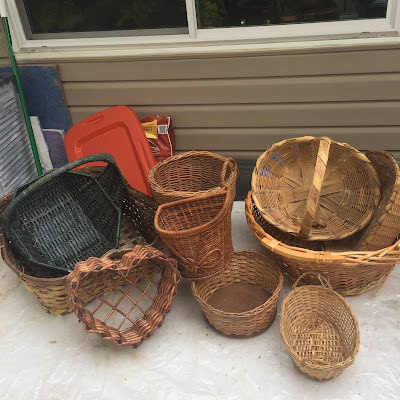 
The thickness and strength of the wicker basket is important. Baskets that are thicker with a tighter weave will give you the deepest imprint on the final project, but will be more difficult to de-mold later. 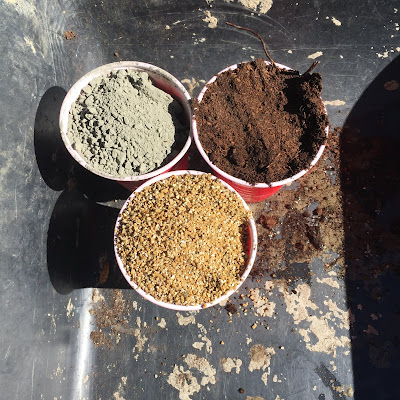 The common mix recipe of one part Portland Cement, one part peat moss and one part vermiculite or Perlite works well for small to medium planters. 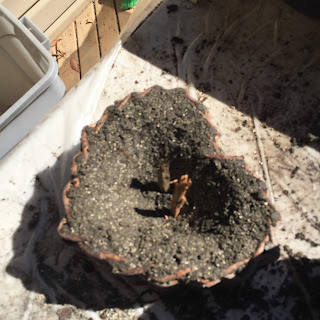 Building on the Inside of the Basket

The above wicker heart was used as a mold to build the hypertufa on the inside.  It will be a small planter just big enough for a mini hosta or sedum.

Wicker Baskets are generally used as inside molds so that beautiful wicker design is imprinted on the outside of the planter. It’s important to firmly press those hypertufa meatballs into the basket. 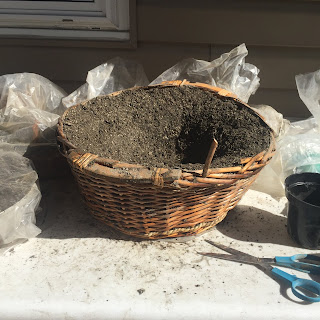 DeMolding from a Wicker Basket

There are a few things you can do to make de-molding the project from the wicker basket easier.


Greasing the inside of the basket with Vaseline or cooking spray before adding the hypertufa mix is one way.


A trick I have learned is to vertically slice one area of the basket from the top to the bottom. Then place some duct tape over the slice to hold the basket steady while you build.

When it's time to demold, pull of the tape and begin the slow process of demolding at the area that you previously sliced open.

There are few garden projects that are as easy and rewarding as making hypertufa garden art and planters.

If you haven't tried it yet, read our Hypertufa 101 and get started!  You'll be hooked in no time.

Love hostas or know someone who does?
Visit our website at SunsetHostaFarm.com
Great hostas at affordable prices!

Why Hostas Die Back Early in the Season

Hostas are known as one of the most resilient  and care-free perennials you can buy.  And that's only a few of the reasons hostas continue to be so popular in shady or semi-sunny gardens.

But when hosta leaves die back early in the season, the culprit is almost always lack of water.

To understand why a consistent watering plan is essential for healthy growth in hostas, it’s helpful to know where hostas came from and how they grow.

Hostas were originally from Korea, Japan and eastern China where they received lots of water, an average of 50" to 60” of rainfall each year, far more rain than in most other areas.

A hosta builds up its energy reserves in the summer and fall and will store that energy in its rhizomes. It will use that energy in the next spring when the hosta emerges.

Inadequate watering during the summer and fall  forces the hosta to drop its leaves early.  This is how it will protect itself by going into an early dormancy so it can survive periods of extreme dryness.

The result is that in the following year, without that stored energy, that hosta will remain the same size or even get smaller, depending on just how much energy it has stored.

If this inadequate watering happens a few years in a row, while a mature, healthy hosta may be able to tolerate the dry periods by simply going dormant, young hosta roots may actually shrivel and die.  Yes, you can kill a hosta!

How Much Water Do They Need?


Generous watering all season long is the best thing you can do for your hostas. A minimum of an inch of water per week, either supplied by Mother Nature or otherwise, is recommended.

Hostas love water!  As long as your soil drains well, you basically cannot over water them.


During the hottest or driest parts of the summer, an increase of water to an inch and a half to two inches is recommended. And it's important to keep this watering schedule until frost.

Some hostas are considered "sun tolerant."  If you have some of these hostas planted in a sunny area, increase the water to two inches per week.  To read our article on sun tolerant hostas, click here.

Hostas that have large leaves will need even more water as those leaves allow for a large amount of transpiration and water loss.

Hostas grown under shallow-rooted trees may require more water as they have to compete with tree roots.

Deep soakings is much better than frequent light waterings.

Why is that important?

Water applied at a very slow rate to the soil for several minutes encourages deep root growth and limits water wasted through runoff.


Deep soakings also encourage the hosta roots to grow deeper into the ground where they can find water during dry periods.

Conversely, frequent light waterings encourage the roots to grow nearer to the surface where the soil can dry out more quickly.


The best time to water hostas is early in the morning when the weather is cooler. This gives the water more time to reach the roots without evaporating.

As a guideline, if the soil around the hosta feels dry to the touch an inch below the soil surface, time for a deep soak.

What can I do?


Watering it well will likely encourage a flush of new leaves to grow.


When you do this, however, keep doing it!  You don’t want to encourage new growth and then stop watering letting the plant die back again.

You want soil that easily drains, has water retention qualities and fertility to feed the plant.

A two- to three-inch layer of aged manure, organic mulch like shredded leaves or grass clippings around the plant (but not touching) will help to conserve the moisture in the soil. That mulch layer is also beneficial to hostas by regulating soil temperature and adding nutrients to the soil as the material breaks down.


To read our article on making leaf mold, click here.

Hostas that are never water stressed will grow bigger, faster and will give you beautiful and healthy leaves longer into the season.


So if your hosta seems to have stopped growing or has actually gotten smaller, stick to a consistent watering plan and watch it come back and give you many more years of beauty in your garden.

Back to the Blog Home Page!

Love hostas or know someone who does?
Visit our website for great hostas at an affordable price!
SunsetHostaFarm.com 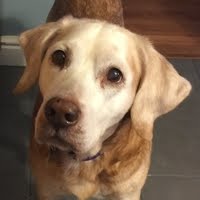