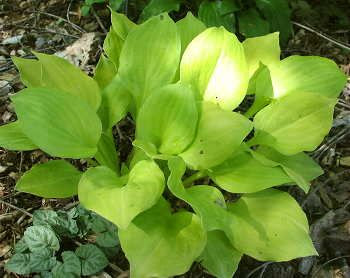 Summer, especially late summer, can be tough on hostas.  Their fresh spring appearance starts to fade under the hotter sun.  There are some things you can do, though, to keep your hostas looking beautiful and fresh longer into the summer season.


For sunnier spots, hostas like Honeybells and Sum and Substance from the Hosta plantaginea group are perfect.


In hotter climates, the heat may cause a hosta to temporarily go dormant and stop growing. You may notice that the outer leaves dry up and wither. Once the temperatures have cooled as Fall approaches, though, the leaf growth will resume. Additional watering during the hottest summer temperatures will go a long way in keeping the hosta healthy.

Lack of sufficient water during a dry summer can cause the hosta to go into mid season dormancy where the outer leaves will fade and wither.

By keeping the hostas well watered through the summer, especially during the hottest parts, you can help to avoid the hosta looking ragged, affectionately called "The Summer Uglies" by keeping the roots moist.

Water deeply and more often. Hosta roots should receive at least 1" of moisture per week for healthy growth.


The most frequent cause of brown edges on hosta leaves is drought stress. ... The leaves usually begin to droop or wilt before the problem becomes severe enough to cause browning.

Increase watering so the plant receives at least 1 inch of water weekly, and cover the soil with a 2-inch mulch layer to help conserve moisture.

Hostas can tolerate periods of dryness if they are otherwise healthy. However, hostas that are never stressed from lack of water will grow bigger, faster and will hold up and look nice longer into the season.

Usually, they can fend for themselves, but watering during periods of dryness will certainly help our hostas look and grow their best.

Employing the use of a good soaker hose works well.  I simply move this one around the hosta farm as I notice dry areas.

In early summer, give the hostas a second (and last) feeding of a balanced 10-10-10 fertilizer. Some gardeners prefer a fertilizer with a little more nitrogen at this time.

Hostas can be fertilized through the early summer, but be sure to stop two months before your expected first frost date to allow the hosta to slowly settle into its winter dormancy.

It is possible to divide your hosta in the summer provided you keep the hosta divisions well watered until established.

Late summer, after the heat of the summer has passed, is the best time to divide hostas. August is usually the perfect time and will give your hosta divisions six weeks before the first frost to establish new roots in their new home.


For a detailed article on when to divide hostas, click here.

Other Care Tips for the Summer

Hosta blooms can vary in their timing from May to September depending on the cultivar. For a tidy appearance, you can pinch off the flower spikes after they bloom.

Water every other day as needed if no rain and let soak through. This is not only to hydrate the hosta plant but will help to flush out the salts that tend to develop in potting soil.

In early summer, give the hostas a second (and last) feeding of a balanced 10-10-10 fertilizer. Some gardeners prefer a fertilizer with a little more nitrogen at this time.

Hostas can be fertilized through the early summer, but be sure to stop two months before your expected first frost date to allow the hosta to slowly settle into its winter dormancy.

Other Care Tips for the Summer

Move the container to a shadier spot in the garden during the hottest part of the summer to reduce plant stress or use some man-made shade to give the hosta a respite from the summer's heat.

Hostas can look great all through the summer if you give them plenty of water, some leaf cleanup and some relief from the heat of the day and that hot sun.